Anxiety and depression have been part of TV presenter Wendy Turner-Webster’s life for just about as long as she can remember.

Money, work and relationship problems have triggered periods of intense anxiety since her late teens, but she’s learned to live with that.

Her depression, however, which first hit during childhood, has only lately been eased by psychotherapy, after years of relying on medication.

In those intervening years, there have been periods when 53-year-old Wendy, younger sister of TV presenter Anthea Turner, has felt so overwhelmed that she’s contemplated taking her own life. 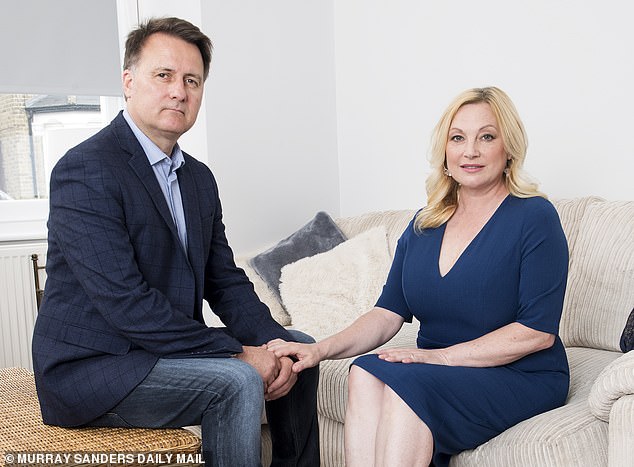 ‘I’ve lent on Gary tremendously down the years,’ says Wendy. ‘I always say I’d be long dead without his love and support.’ The pair are pictured together above

‘There was a time, two or three years ago, when I wouldn’t leave the house because I didn’t want the temptation of getting too close to the railway line,’ she says.

‘But contemplating suicide is different from attempting it. I’ve always come back to the point where I could never do that to my husband Gary, the children and my parents.

‘That said, I’ve denied myself the escape route, if you like, of ending this debilitating depression. It leaves you feeling trapped.’

Wendy has two sons — Jack, 21, and Freddie, 17 — by actor Gary Webster, 56, best known for replacing Dennis Waterman as George Cole’s sidekick in Minder and more recently as a regular in the Channel 5 soap, Family Affairs. 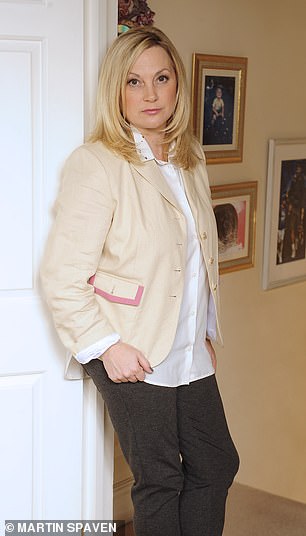 Wendy has decided to speak out about her experiences as she and Gary have become ambassadors for a charity, Silence of Suicide, which is dedicated to breaking the taboo of the deep-seated depression that can lead to someone taking their own life

‘I’ve lent on Gary tremendously down the years,’ says Wendy. ‘I always say I’d be long dead without his love and support.’

The number of people experiencing mental health issues has risen sharply since the start of the pandemic, according to a Public Health England survey reported this week. It found that 56 per cent of people said their mental health had declined since March last year, with 48 per cent now feeling anxious and 46 per cent suffering with low mood.

Wendy has decided to speak out about her experiences as she and Gary have become ambassadors for a charity, Silence of Suicide, which is dedicated to breaking the taboo of the deep-seated depression that can lead to someone taking their own life.

It was set up in 2015 by Michael Mansfield QC, following the suicide of his daughter Anna, together with his third wife, Yvette Greenway, who had lost a friend to suicide.

For many years, Wendy felt too embarrassed to discuss her deep, bleak periods of depression. One such wave hit in 2017 as her 50th birthday approached.

‘I despaired at the thought that life looked like it was never going to be better than this,’ says Wendy.

‘I became increasingly preoccupied with thoughts questioning why I was on the planet. I was overwhelmed with waves of negativity.’

She was already on the antidepressant sertraline, which she’d first been prescribed in the 1990s. Over time, her doctor gradually increased the dose, from 50mg daily to 200mg, the maximum permitted.

But that was not enough to halt the depressive periods altogether — and a filming job last summer became Wendy’s most recent tipping point into severe depression.

She was working with a charity on an undercover investigation into a pig farm and the conditions in which the animals were kept.

‘In the dead of night, we filmed inside a crowded hangar housing 8,000 pigs where there was probably only room — and food — for half that number,’ says Wendy. ‘I’d never seen anything like it in my life.’

She cried more or less non-stop for days after, she says.

‘I became so depressed it was as if my body had shut down. I was in a state of semi-paralysis and took to my bed for days.’ 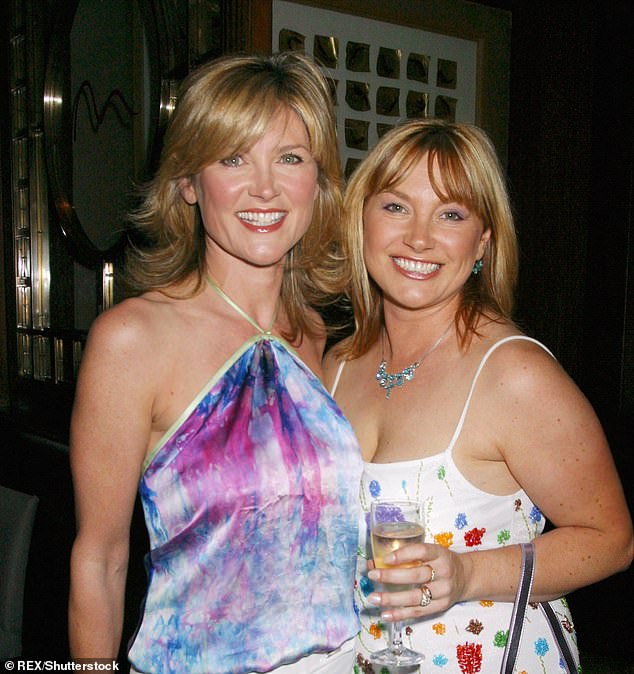 Her depression, however, which first hit during childhood, has only lately been eased by psychotherapy, after years of relying on medication. In those intervening years, there have been periods when 53-year-old Wendy, younger sister of TV presenter Anthea Turner, has felt so overwhelmed that she’s contemplated taking her own life. The pair are pictured together above

Her GP referred her to the local mental health service for counselling. Even so, Wendy had no expectation that anything useful could be done for her.

‘I was sceptical,’ she says. ‘What good could counselling achieve? How could words make any difference to my ingrained depression? I was more or less reconciled to the fact that this was what I was destined to feel like for the rest of my life.’

She sobbed her way through an initial assessment (by phone because of the pandemic), at the end of which she was told she had ‘severe existential depression’. In layman’s terms, it translates as life having no meaning; of hopelessness.

‘While I was quite shocked by the diagnosis, because it was more deep-seated than standard depression, I was also quite relieved,’ says Wendy. ‘Now it had a name, I could embark on how to deal with it.’

She was also told that she’d benefit from a three-month course of cognitive behavioural therapy (CBT), which aims to improve mental health by challenging and changing unhelpful thoughts and beliefs.

Wendy waited three months before she was assigned an NHS counsellor. In November, she began her weekly one-hour telephone sessions.

Now, after eight sessions, she says she is amazed by how helpful they’re proving to be, because they’re training her to keep calm and analyse her feelings rather than give up in despair.

‘I’m lucky that I always speak to the same woman,’ she says. ‘You’re baring your soul and I couldn’t have done that with a succession of counsellors.

‘I have to do homework every week — reading and written exercises where I record my thoughts on a daily basis — to train myself to think in a different way. I can only say that it’s been a revelation.’

But it’s not been plain sailing. Three weeks into her course, she suffered a full-blown panic attack about her finances.

The family’s fragile fortunes have not helped Wendy’s mental health over the years.

The family now live in a rented house in West London but, at one stage, with a credit rating so poor they couldn’t provide a guaranteed lump sum to a prospective landlord, they had to live in a Travelodge hotel.

At times, she and Gary had to sleep in a car while their children stayed with friends.

Their finances started going wrong in the early 2000s when a business deal, in which Gary was involved, failed to deliver the promised substantial fee.

On occasion, Anthea lent them money, including to help pay for their sons’ private school fees, but they have never been in a position to repay her.

‘We haven’t spoken for three years,’ says Wendy, ‘and I can’t see that changing any time soon.’

Determined to put such experiences behind her, Wendy made a commitment in 2020 to stay on top of her financial affairs.

‘So I deliberately set up direct debits in a new business bank account to keep the bills separate from other money and ensure they are paid on time.’

Yet in November, looking at her computer, she could find no record of the direct debits.

‘I began to panic,’ she recalls. ‘A feeling of almighty dread started off in my stomach and I could physically feel it rising up my body — to a point where I was convinced it would reach my brain and it would implode.

‘After all our financial woes in the past, it seemed like the nightmare had begun again.

‘I started hyperventilating. Luckily, Gary was in the room at the time and caught me as my legs went from under me. I was so panicked, I couldn’t tell him what had happened.’ In the event, the explanation was straightforward. Wendy had been looking at the wrong page on her online account.

‘This wasn’t a symptom of my depression but it did underline the fragility of my mental state. It could have been anything that set me off.’

But Wendy says the financial issues don’t begin to explain the depression from which she has suffered for decades.

‘When I was seven, I can clearly recall sitting in front of a mirror and thinking that if I looked deep into my own eyes long and hard enough, I’d find the answer as to who I was. I couldn’t work out why I should be here.

‘I was too young to articulate this to myself at the time, but was I suffering the early signs of depression?’

Wendy is the youngest of three girls. Her middle sister, Ruth, was born with spina bifida and died when she was 15 and Wendy just 11. ‘That was a terrible shock,’ she says.

Wendy married for the first time at 19 — an emotionally and physically abusive relationship which ended in divorce before she was 25.

In 1996, she moved to London and got a job on the satellite channel Live TV, before being hired as a presenter on Absolutely Animals on Channel 4.

‘I was earning more money than I’d ever dreamed of,’ she says.

‘I bought my own house — everything should have been perfect. So why was it that I was disappointed I’d woken up each morning; why did I feel I’d rather be dead?

‘Mental problems weren’t something you talked about back then. Fine, if you’ve got your arm in plaster. But it’s awkward if your spirit is broken.’

She knows that there will be some who ask how she could feel so low when she had so much.

‘What some people don’t understand is that depression isn’t linked to material possessions or being comfortably off. It’s a separate entity and much, much more fundamental.’

She didn’t seek medical help until the mid-90s, when she confided in her GP. The sertraline she was prescribed made a ‘huge difference’ by evening out her moods, she says. ‘I started feeling the best I’d felt for as long as I could remember.’

Having been through so many low points, she is surprised that CBT is helping as much as it is.

‘I wouldn’t have believed it, but these people are experts — they know what they’re doing,’ she says. ‘I’m slowly being shown a blueprint for the best way of living the rest of my life.’